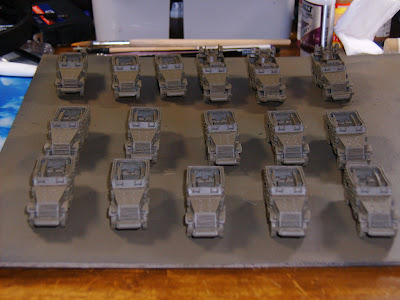 On to the building of these things. Trying to clean mold lines and flash off 52 little wheels last night about drove me nutter than I already am and I now have some nice file marks embedded into my fingers. of course then you have to get the wheels all glued on and even so the trucks don't wobble around on 3 wheels, which 3 or 4 of them ended up doing anyway, thankfully its minor. in the back row you can also see the 3 quad .50 half tracks, these aren't so bad as they use the plastic sprues for the wheels, tracks and front bumpers. I honestly prefer the metal parts to the plastic here though I do wish the quad guns were plastic as keeping the 4 guns straight is a nightmare, most of my German quad AA guns are missing at least one barrel due to breakage from fixing the over the last few years. Thus far everything is together and primed with the new Vallejo Color surface primers in Olive Drab. Detail work will continue on these over the weekend hoping to get them on the table this Monday night. They wont be done then however as I have the Soviet crew figures to fill them out with, Cant have anyone thinking these guys are fighting for the Americans now can we?
Posted by Matt D at 5:41 PM